700 South Deli & Catering
@700SouthDeli
You are here: Home / Fun Facts / The History of the Sandwich: Simple, but Complicated 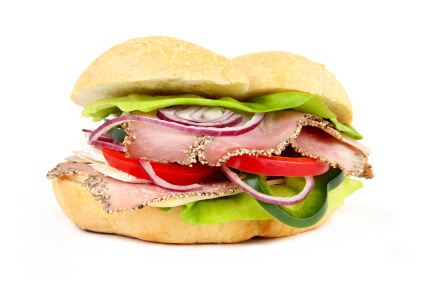 Did you know Americans consume somwhere around 300 million sandwiches daily? That’s somewhere along the lines of one sandwich a day per person!

Since we’re always on the go, sandwiches make for an easy go to, offering portability (can be eaten without a plate if needed) and versatility (can be filled with meat, jam, chopped nuts, butter and is only limited by what’s available.)

But did you know that the sandwich has a long, long history (as early as 1st BC), when Hillel the Elder, a famous rabbi, started a tradition of filling two matzohs, unleavened bread eaten by the Jews in the Passover holiday, with spices, apples and chopped nuts to eat with bitter herbs? Serving as a reminder of how the Jews suffered before deliverance from Egypt, while representing the mortar used in the construction of Egyptian buildings.

Although the sandwich has a rich background, it wasn’t embraced in American society until later years because of it’s ties to the country’s colonial past that the patriots wanted to forget.

The History of the Sandwich – Its Beginnings

Popularized in 1762 by the 4th Earl of Sandwich, John Montagu, who was known for his gambling problem and for spending long hours every day at the card table, the sandwich was born.

The story: During a long binge, Montagu asked his house cook to bring him food to eat, but he was very particular, then—something he could eat without getting up from his seat.

Because Montague enjoyed meat between two slices of bread, he ate it every day (The original sandwich was a slice of salt beef tucked between two slices of toasted bread). Its popularity grew in the London society that it also took the Earl’s name. But, you probably know by now where he got the idea of this creation—from his unnamed house cook.

During his Mediterranean travels where he witnessed how the Greek and the Turkish served their meze platters (with cheese and meet sandwiched on layers of bread). So, Montagu took these ideas and the sandwich had added varieties.

His creation, which took off fast, became a staple in England; in fact, Edward Gibbon mentioned ‘sandwich’ in one of his diary entries in which he wrote “twenty or thirty of the first men of the kingdom” were eating it in a restaurant.

But no supporting evidence was found pertaining to this gossip in Grosley’s travel literature. Historians furthered there was no solid background at all because Montagu was a minister of the cabinet, making his plate full most of the time in 1765 … Although, no doubt, he was the creator of the sandwich to sustain himself at his desk during long hours of gambling.

So, where is the sandwich in American history?

In The United States (1840), the credit for the introduction of the sandwich was given to Elizabeth Leslie, who introduced it in her cookbook “Directions for Cookery.”

In her book, she wrote a recipe for ham sandwiches, served as a main dish at a luncheon or for dinner, which are made with thin slices of slightly buttered bread with a little mustard spread, as desired, and are to be rolled up or laid flat on the plates.

During the 1900s, the sandwich became a staple in the American diet because it was portable for both schoolchildren and the American work force; in fact, bakeshops starting selling pre-cut bread slices. Later on, hamburger was born when Louis Lassen, owner at Louis’ Lunch in New Haven, Connecticut, introduced it by flipping beef patties onto bread. The hamburger, our American staple, is a part of the sandwich’s timeline of history. Follow this link for a delicious Turkey Burger Recipe!

But no matter how you create your sandwich, whether piled high with gourmet meats and cheeses or concocted from leftovers in the refrigerator, recall its past history.

Annually, on November 3, “Sandwich Day” is held in honor to its creator, John Montagu, who ate the sandwich as his convenient and timesaving nourishment when engaged in 24-hour gambling sessions and who was born on the same day.

Do you have your own story of the sandwich? Feel free to share it with the community by writing it down in the comment section below, or you can spread the word about the “History of the Sandwich” by sharing this article with your social circles.

Thank you! Everyone loved the sandwiches and I will definitely use your company again soon!