700 South Deli & Catering
@700SouthDeli
You are here: Home / Catering / A Knish-Sized Short History of the Delicatessen 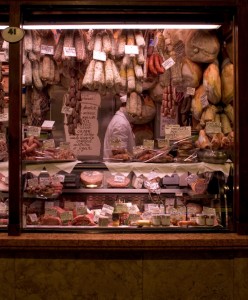 “A pastrami sandwich is what’s bad and good about food. It’s the sacred and the profane.”

Mario knows of what he speaks.

The most popular Delicatessen are noisy, busy, crowded: a place that attracts customers with its enormous menu, plethora of aromas and atmosphere of energy. This dynamic encourages the flow of ideas so it’s no wonder that the most famous delis attract celebrities, the rich and the powerful. These are the places where agreements are made, movie scripts are discussed and handshakes seal the deal. The local delicatessen also provides a meeting place for longtime friends and business associates; it’s a well-known fact that the iconic TV personality Larry King still holds court over a near-daily kaffeeklatsche at the famous Nate n’ Al Deli in movie star-laden Beverly Hills, California.

Great delicatessen is in a class by itself, distinguished by characteristics that set it apart from a fast-food chain or other sit-down restaurant. Nearly two hundred years from its ethnic roots, the delicatessen has continued to reinvent and redefine itself into an all-American food experience.

Some of the best, most enduring and most famous delis have Jewish roots. While we can thank the two million Jewish immigrants between 1880 and 1924 for developing the deli to its exalted level, the first delicatessens were really born of another group of settlers. Between the early 1880s and 1920 over 5 million German migrants landed on American shores and this industrious group was the first to open small specialty food shops. They featured cured meats such as sausages, knockwurst, liverwurst, bratwurst, sardines, ham and pigs’ feet as well as pickled eggs and herring, and imported condiments in tins and jars. Indeed, the word, delicatessen, a plural form, derives from the Germansingular noun delikatesse.

The next largest immigrant group was the Irish at 4.5 million, but they inspired little influence on the deli landscape, leaving it to the two million Italians who elevated the neighborhood delicatessen to high art. Swedes, Norwegians and Poles made up the next largest groups from the Ellis Island roster that needed to establish roots and stability. Many new immigrants found themselves in the food business, often starting as street vendors before acquiring the small spaces they turned into eateries.

Throughout the decades, other groups such as Chinese, Koreans, Vietnamese, Puerto Ricans, Greeks, Russians and West Indians, among others have also adopted the deli business model which has become a cultural pillar in their respective ethnic neighborhoods.

But back to the mother ship: the Jewish deli. Those fleeing devastating poverty and Eastern European persecution from the pogroms brought their food preferences with them, copying the German model with a kosher accent. The holy Jewish trinity of pastrami, corned beef and tongue, between slices of seeded rye or pumpernickel bread became the foundation of things to come. Gefilte fish, lox, knishes, bagels, peppery pastrami, corned beef, chopped liver, chicken soup, cream cheese-stuffed blintzes and cheesecake soon became trademarks of the Jewish delicatessen.

Delicatessen evolved as the unique retail version of comfort food, sort of like Mom’s meat loaf. In logistical terms, the early deli was a combination grocery store and restaurant, but there the comparison ended. In those early days, grocery stores sold packaged goods and butcher shops sold uncooked meats. Delicatessens filled a different need by selling high-quality cooked, cured meats that were ready to eat; cheeses, breads, side salads and condiments like pickles, olives, mustards and exotic imported canned goods, reminding customers of their homeland.

The small neighborhood delicatessen still survives but it is an endangered species. America’s obsession with lighter, healthier foods has an effect and many delis have closed as a result. But the delicatessen model still offers advantages over fast food drive-thrus and coffee shops. A deli can either be strictly takeout, a sit-down restaurant, or a combination of both. They often serve breakfast, lunch and dinner. A good deli will offer a larger and fresher array of menu items than most restaurants. They sell premium, high-quality cold cuts (pastrami, corned beef, salami), pungent cheeses by weight and prepare sandwiches to order. Fresh bread is sometimes baked on the premises. A wide selection of side salads such as pasta, potato, chicken, tuna, shrimp, and vegetable make it the perfect place to order party trays for a gathering. They offer a wide variety of grilled sandwiches of which the Reuben is King. Probably the most perfect sandwich, a Reuben, with its layers of lean corned beef, buttery Swiss cheese, tart sauerkraut and crusty rye bread slathered with Russian dressing, uses a combination of flavors and textures that create a nearly divine gustatory experience.

Recognizing the need to capture greater numbers of customers, some larger delis have expanded into other menu offerings such as desserts, cookies and cakes, pizza baked in a wood-burning oven and healthy wraps designed for the lighter appetite.

So, the modern deli, while challenged in today’s atmosphere of lighter fare, will never completely go away; it has too much to offer in terms of history, tradition, quality, variety, great taste, atmosphere and comfort.

Put simply, delicatessen is too delicious to disappear.

Hello – I had a meeting today and completely forgot to take care of lunch for my guests. I called early this morning to order lunch and 700 South Deli, came thru for me! I really appreciate it!