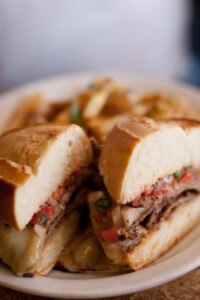 CELEBRATING WITH FREEDOM ON THE 4th OF JULY

How lucky we are as Americans!

We have nationalistic pride, grit, moxie, an entrepreneurial spirit, and best of all, freedom. Americans are often viewed as wildcatters, cowboys, and trailblazers. We take other people’s ideas and make them our own (think: pizza, hamburgers, French fries…).

While we may not relax as often or as freely as people in other nations, there is one day that is all about fun, family, food and commemorating our national spirit.

The 4th of July is almost always about grilling, too.

Cuts of meat and their names, region to region, can be tricky things. The cut known as tri-tip originated in the central coast region of California in the late 1950s. It was prized for its full flavor, low fat content and reasonable cost, compared to other meats. By the early 1990s, tri-tip was a solid West Coast favorite, sizzling on portable grills all over the beaches of Southern California and its wild popularity continues.

As the Bard confirmed, “A rose by any other name would smell as sweet…” the tri-tip cut is also known as sirloin tip roast, triangle roast or bottom sirloin butt.

Tri-tip is even more delightful if it is marinated for at least four hours prior to cooking. Because the meat is so robust and flavorful on its own, what you use for a marinade really doesn’t matter.

The following recipe for marinated tri-tip roast captures the spirit of “anything goes.” This flavoring will lend a sweet, aromatic crust onto the meat that will only intensify with a hot sear on both sides and then slow grilling.

You simply can’t hurt a tri-tip roast, except by overcooking it.

Behind every great recipe there is a story.

This marinade came to our attention from a loyal customer and fan of 700 South Gourmet Deli and Cafe. Back in the 1990s, our customer dated a man who was a great home chef. He planned a beach barbecue for that evening and decided to marinate a tri-tip. Ever the competitive cook herself, our friend followed him as he tore through the kitchen, grabbing a collection of the most unlikely of ingredients to pour over the roast. As he embarked on this dervish-like mission through the kitchen, she wrote down everything that went into the marinade, wondering how it could ever work.

To this day, that tri-tip roast, grilled on a tiny Weber on the beach, was simply one of the best things she ever tasted.

Sadly, her friend and excellent home chef passed away some years ago, but this isn’t what killed him.

Grilled Tri-Tip Roast
Recipe Type: Entree
Cuisine: American – West Coast
Author: 700 South Deli
Prep time: 30 mins
Cook time: 30 mins
Total time: 1 hour
Serves: 4
The best thing about the Tri-Tip Freedom Marinade is that you probably already have a few of these ingredients in your kitchen. Also, this marinade needs no proportions. Let your free American spirit decide what sounds, looks and smells good and create it with the utmost abandon and disregard for old rules and structure. Just make sure there is enough liquid to nearly cover the roast.
Ingredients
Instructions
Notes
Grilled tri-tip goes great with baked beans, corn on the cob and garlic bread. Amazingly versatile, any leftover meat can also be minced and used for tacos, fajitas or enchiladas. Grill well, relish your freedom and have a safe Fourth of July!
3.2.1230

The selection was great, the delivery was prompt and the food is delicious! Thanks!